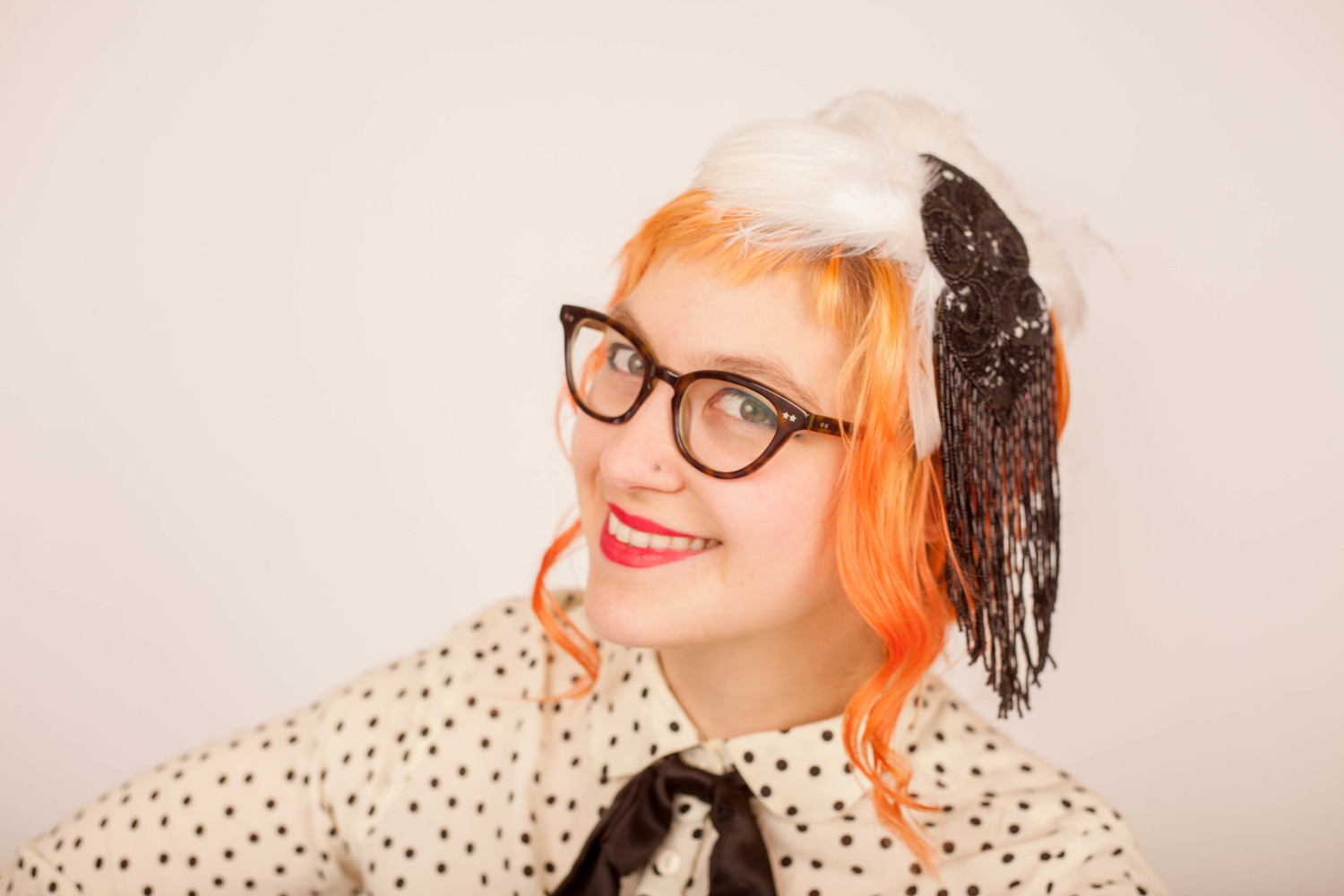 Naomi in the HB studio with photographer Greg Bowen.

When it comes to costuming in Baltimore, Naomi Davidoff is the sorceress supreme. She plays the demanding role of the maker well — stitching and gluing some of the most memorable costumes in Baltimore DIY theater. She has taken the mantle of lead costume designer for four of the Baltimore Rock Opera Society’s (BROS) original productions. You can also find her garb on Man Man lead singer Ryan Kattner. We got a chance to sit down with Naomi and find out what fuels her magical rocket boots.

HBP: What has been the pinnacle of your artistic achievement been so far? What are you most excited about?

Naomi: Oh, man. It’s crazy, I've gotten pretty lucky with the opportunities that I’ve fallen into. I was asked to take part in Boston’s Fashion Week in 2013, so I went up to Boston and showed my work. It taught me a lot about what I wanted to do. I was right out of school! Oh my god, I’m going to Fashion Week! This is my thesis! This is crazy!

I went there alone. I just went. I tried networking, I went to some events, but it’s very hard to be both an artist and a business person. It is so hard to freelance — to do all of the business things, and be the one who does the work too. To be the one who is styling the model, designing, producing, and marketing. It’s so much. So much. I was making my promotional materials and designing my lookbooks in the hotel, and going out to FedEx and printing them a couple of days before the show.

I learned a lot about having an assistant or someone else to be supporting it with you. They make it more feasible – more possible. It was good exposure, but I also realized that the fashion industry isn’t where I see myself, or where I fit. I’m really glad I did it, but it’s actually geared more towards another way of thinking.

It’s also gotten me involved with a band a really admire, called Man Man. I emailed them to get permission to use their songs during fashion week. I mentioned "you know, as a thank you, I can make you something.”  They were all about it. It turned out, the thing that I ended up making them was this tunic covered in Wolf Blitzer's faces. It was their first song, called End Boss, so it was about Wolf Blitzer. It was ridiculous. CNN picked it up. Anderson Cooper did a story on it, Wolf Blitzer saw it, and did a story on that. I was at fashion week, watching CNN. It was mind blowing. I was like: What is going on!? Everything is crazy! That was intense. 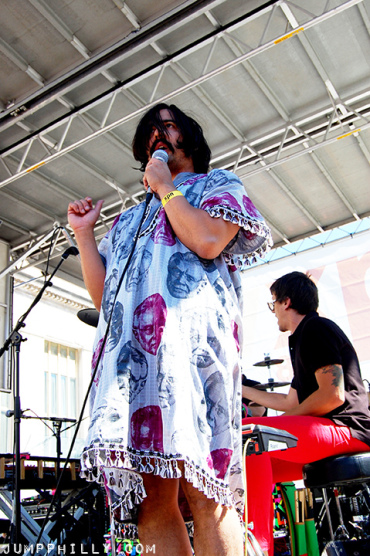 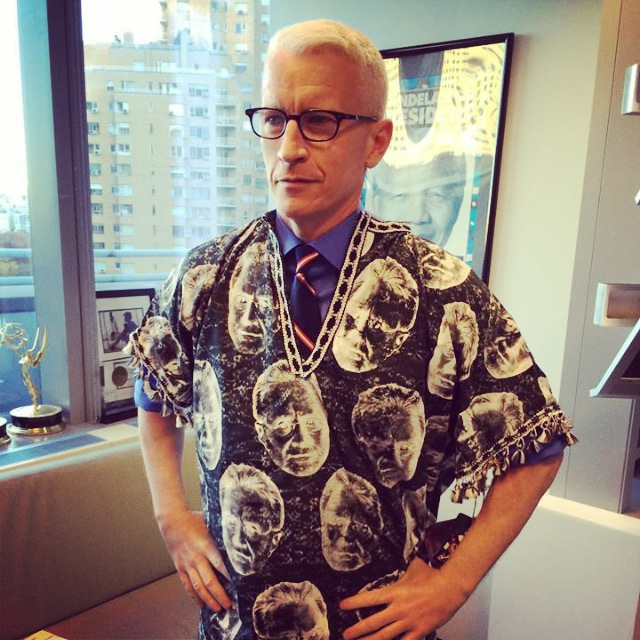 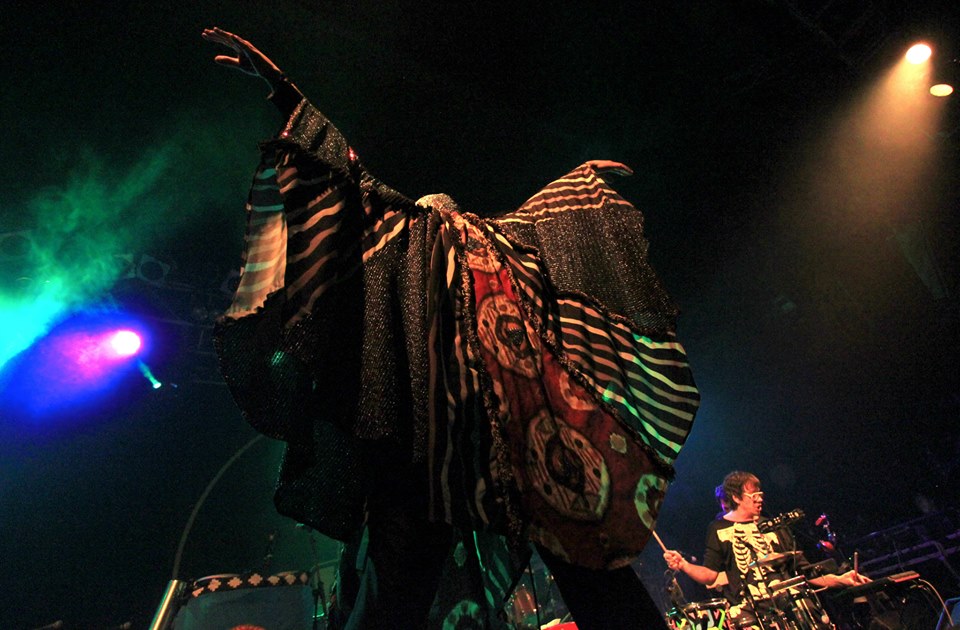 Of course, working with BROS, I realized that I’d rather be working on things with lots of people. Something that is community focused — making costumes for good rather than evil. That was a huge realization.

The other thing about the fashion week experience was that I felt like I was trying to fit my work into a box of what it really wasn't. A lot of the times, my costumes are just as much inspired by the people wearing them as they are a specific style. That is the reason I make them, for specific people. They’re more about narrative, and storytelling. It was hard to fit it back into that box.

HBP: So are you trying to say that Fashion Week culture is evil, and that costuming is good?

Naomi: It’s not evil, it’s just not my style. I’m not trying to mass produce my work. That is one thing I’m sure of. I’m not trying to make ready-to-wear clothes. I don’t really care if someone is wearing my name — that’s not important to me. What is important to me is turning over people’s perception of what every day is, or could be, through garment design and spectacle. 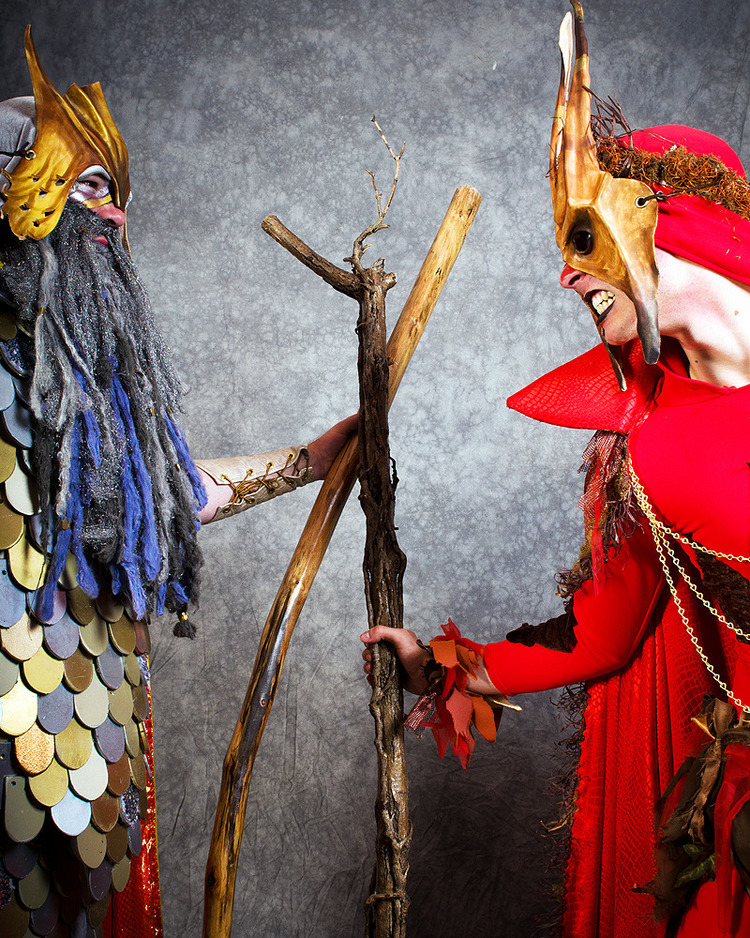 Loki (Greg Bowen), and Odin (Gaines Johnston) facing off behind the scenes of BROS' 2012 production: Valhella.

HBP: You were costuming for both your costume shop and BROS?

Naomi: I was costume directing for BROS. That was the other thing. I was working this job that I considered a dream job, but it was very hard for me to maintain my artistic practice. It was really hard for me to do what I wanted to do. That was the first legit full-time job I’d had. It was really awesome in a lot of ways, but it also restricted me from having a balanced life-style. It was really hard to turn that job down. I really wanted to do it, but I just honestly couldn’t. I’m much happier just teaching workshops for kids a couple of days a week. I was working as an interior designer while doing party entertainment stuff. My days kind of consist of work — spurts of other work, relaxing, BROS at night. BROS five days a week, all the time. It’s a really nice constant that I have BROS to focus on — a real schedule.

HBP: How many costumes do you think you’ve designed?

Naomi: This my fifth BROS production, and this is my fourth production as costume director. Murdercastle was about sixty costumes. Electric Pharaoh was about fifty. Valhella was about forty. Twenty costumes for each of my fashion shows. Probably about two hundred. If I had to compile them. That isn’t a lot for a costume designer, but I’ve also only been doing this for a few years. 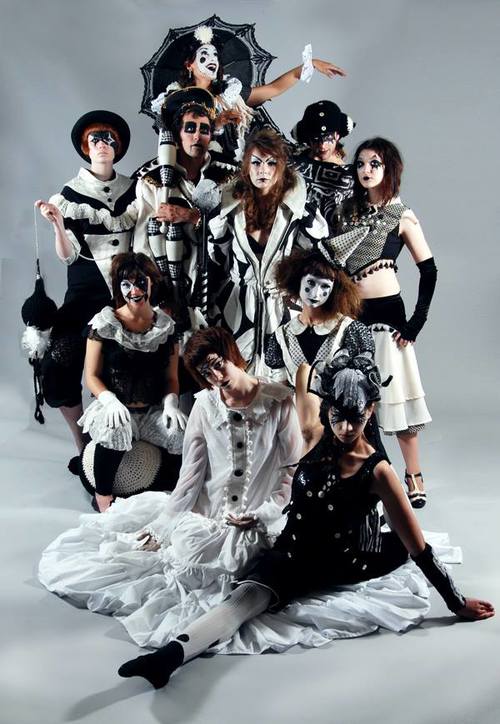 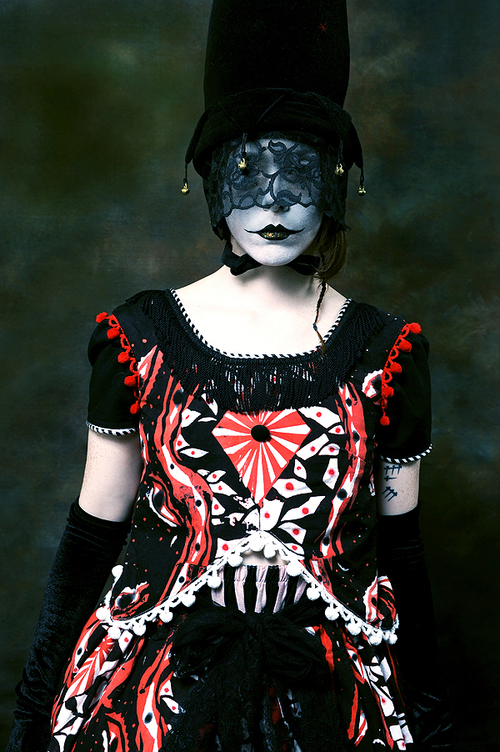 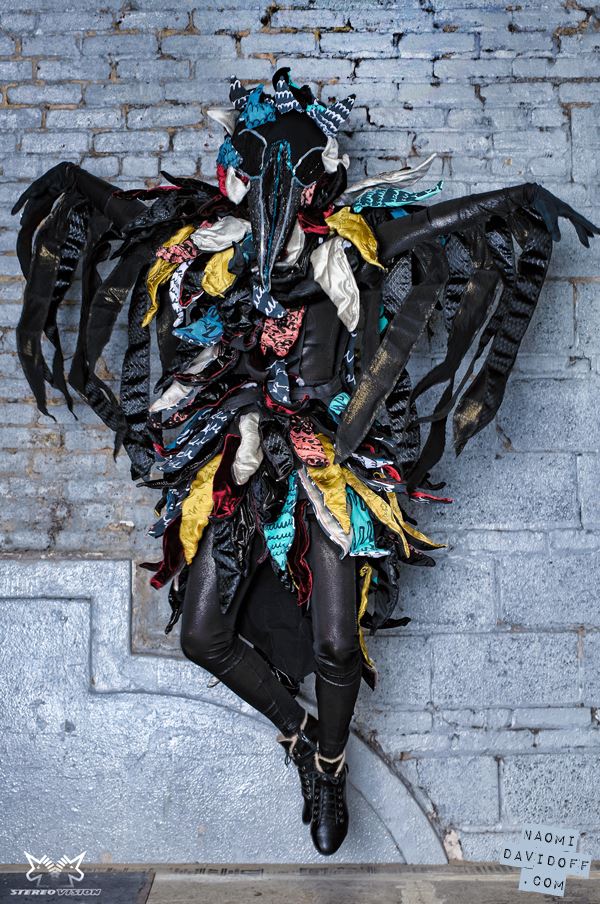 HBP: How old are you, and how long have you been doing this?

Naomi: I just turned 24 a few days ago. I haven’t been doing this for that long. I started doing design in school. Probably since 2011.

HBP: So you’ve got rocket boots on!

Naomi: I’ve got rocket boots on. That’s what keeps me going.

HBP: Is the inconsistency ever harder?

Naomi: It is. It’s difficult not knowing what my next job is, and job searching all the time. To not have a solid thing, since most of work is temporary contracted work. I’ve been an over-hire stitcher, so they really only called me when it gets really busy. You’re constantly looking for something, which is tiring. Now I am trying to find something that is more stable, so I don’t have to keep jumping around.

I just graduated — I’m still learning how to do this life thing. But, I feel my path is a little different than your average path — just finding a job and sticking with it. That is really tough with my freelance projects.

HBP: Have you ever been fired from a position because of your freelancing? 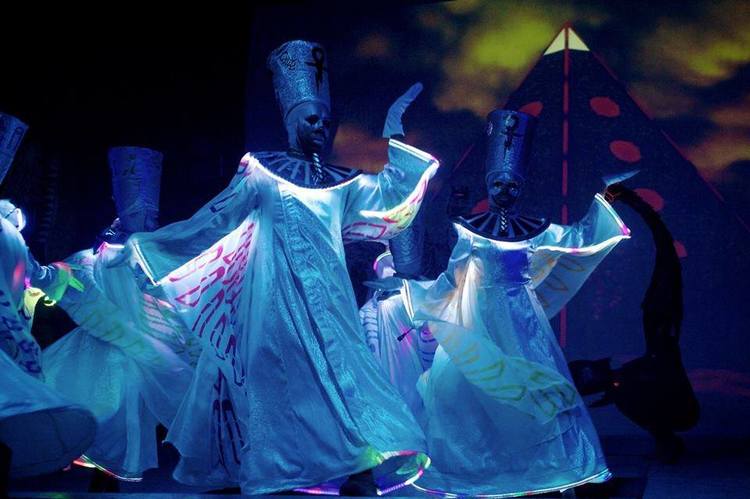 Naomi: I’ve not been hired because of it, that’s for sure. People don’t want to hire me because I can’t dedicate a certain amount of time, that’s rough.

HBP: Look into the crystal ball. Where are you in ten years?

Naomi: I’m trying to figure that out right now, actually. I’m a very goal oriented person, so I’ve been hitting the costuming thing hard — exhausting the city’s resources for me. I know that Baltimore is great for me right now, but it’s not an ideal city for what I want to do, for sure. In ten years, I’ll probably be somewhere else. I can’t tell you where. I realized that I also don’t want to be living in New York or L.A. That narrows things down. I’ve definitely thought about Seattle a lot.

BROS has had a huge part in defining what I want to do with my career. I’m basically a costume shop manager, and I never would have had the opportunity to explore that avenue without working for a nonprofit.

HBP: Do you want specifically to make costumes? Is that your trajectory?

Naomi: If I can spend my life making costumes, I will be very happy. Right now, I’m not getting paid to do what I love. It’s hard. I am getting paid, but not in the sustainable full-time job way. So if I could work as a designer for movies or theatre, and make a full-time salary too, that would be ideal. And obviously also have a connection to the costumes I’d be making. It’s a tall order.

HBP: Do people have that job? Is that a real job?

HBP: Do you have advice for people struggling to make artistic advances? How do you keep going without knowing where it is that you’re headed?

If you’re interested in exhibiting, you have to go out and find those galleries. Reach out to them, find out if there are any opportunities. Give yourself a mental reason for finishing things. I set a lot of deadlines for myself, otherwise I would never accomplish anything.

I spent a lot of time searching for things, rather than just waiting for things to come along. Give yourself a sense of purpose. Motivate yourself.

Naomi: If you’re a maker, don’t get discouraged, just keep making all the time. That’s the most important thing. Don’t stop making things even if you’re feeling discouraged. Stay in the studio until 3:00a, even if only to draw in your sketchbook. Stay active as an artist. Stay true.